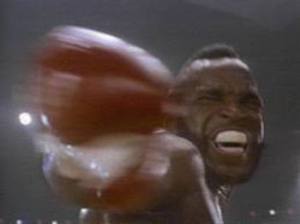 This is my favorite part: “Hey Woman! Hey Woman! Listen here. Since your old man ain’t got no heart, maybe you like to see a real man. I bet you stay up late every night dreamin’ you had a real man, don’t ya? I’ll tell you what. Bring your pretty little self over to my apartment tonight, and I’ll show you a real man.” That real man is our Letter T (for Mr. T.) in the A to Z Challenge and the only man to beat the cowboy shit outta Rocky Balboa: Clubber Lang.

Rocky Balboa is an American icon, a testament to that can-do, against all odds spirit that makes this country great. Now I’m a Rocky fan. I’ve seen 5 out of 6 movies in the theater; I own the blu-rays. I have a Rocky T-shirt. My dog’s name is Rocky. I don’t always work out but when I do, it’s to the Rocky theme (stay thirsty, my friends). I’ve used Rocky lines on my wife (I don’t tell you how to be a woman; don’t tell me how to be a man).

So I walked into Rocky III thinking I was gonna see Sylvester Stallone whoop on some no-name dude with a funny haircut. I already knew Rocky was gonna win—his name is on the title, right? I mean Rocky was all impressive beating up sides up beef in the cooler. Until I saw Clubber Lang beating up sides of people in the ring during his montage. He knocked some poor sap completely out the ring! You hear what I said? OUT THE RING! You train for, what, 8-10 months, maybe more, to get into ring with some cat for him to punch you out of it? This was the equivalent of Mike Tyson before Tyson was boxing.

Clubber Lang was something special. Aside from the fact that his mama named him Clubber, take a look at his stats: he mounted an aggressive and successful campaign for the title and told anybody who would listen what he was doing (I want Balboa! You hear that, old man! You tell Balboa to come here!) He did it all by himself (I live alone. I train alone). And he knocked Rocky out in two rounds. Two! When Rocky fought Apollo Creed the first time, they went 15 rounds and it was a split decision. And they each spent 6 weeks in the hospital. The second time, they went the full 15 rounds again and Rocky beat Apollo on the count. Clubber comes out and lays Rocky’s shit out all across the canvas and killed his manager in the process in less than 6 minutes.

The truth is, Clubber Lang broke Rocky. He broke his body, his mind, his spirit. And then he talked shit about it.

I’m talking classic lines like “I don’t hate the man but I pity the fool,” and “I’m gonna beat you like a dog! A dog!” He said, “I’m gonna torture him. I’m gonna crucify him. Real bad”—as though there is moderate crucifixion, medium torture. This crap happened before the fight, during the fight, after the fight. On TV. Cross country. In the locker room before the rematch. In the ring before the fight started. Called out Rocky’s woman. Tried to fight Apollo during introductions. This cat never shut up and had the muscle to back up everything he said. It was an impressive, systematic, methodical breaking of a man. It took a cross country flight to South Central and two muscle-bound men in mesh half-shirts playing in the ocean to get Rocky back in the ring.

Why is Clubber Lang one of the best villains? He broke the hero. He broke an American icon. He broke a man with a statue. Kicked him when he was down. And got a cartoon and a breakfast cereal out of it. You gotta tip your hat to that.

And so, we are back on our regular schedule. Tomorrow is Kyzer Soze from the Usual Suspects.