In 1997 I kept hearing about this cartoon that had these “foul-mouthed third-graders.” Reviewers would talk about how one of the kids would die every episode, only to be brought back again like nothing happened. Critics lambasted the content, the irreverence of the characters, the low budget quality of the animation. I couldn’t get my mind around it.

Until I saw it. 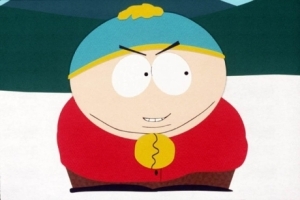 The first time I saw South Park was probably the hardest I have laughed. Ever. In those 30 minutes I met Stan, Kyle, Kenny (who is my favorite), Chef (played by Isaac Hayes), their closet gay teacher, Mr. Garrison (who later had a sex change but was still bald), and the most warped child on TV, Eric Cartman. The boy was yelling at his cat about a potpie, farting fire, then farted and set the cat on fire. Yes, I am aware of how juvenile that sounds. Yes, I realize I am damn near 40 years old. Yes, it truly was that freaking funny.

I think I peed myself that day.

Now everybody may not agree with my sense of humor and be slightly unfamiliar with South Park in general and Eric Cartman specifically. Fine. For you squares, here’s the rundown: Eric Cartman is the overweight (I’m not fat, I’m big-boned) “friend” of Stan Marsh and Kenny McCormick—he hates Kyle—and is decidedly South Park’s most consistent villain. And this is a show that gave us Man-Bear-Pig, Scuzzlebutt (who has Patrick Duffy as a leg), the succubus, a piece of poop as a Christmas character, and Barbara Streisand as Mecha-Godzilla. Cartman is a racist, sexist, homophobic, anti-semitic, xenophobic, spoiled, little fat child and one of the funniest characters to ever grace my TV. He’s Archie Bunker—if Archie didn’t have to worry about the FCC, the laws of physics, child welfare, and was in elementary school.

Cartman’s antics are prolific, horrible and hilarious—here are some highlights:

But these are the antics of a misguided youth—when a 9th grader named Scott Tenorman tricked Cartman into buying his pubes so he could reach puberty, Cartman exacted his revenge: he had Scott’s parents killed, ground into chili and tricked Scott into eating them. And then licked his “tears of unfathomable sadness.”

He killed this boy’s parents, made him eat them and then licked up his tears. I don’t know what else to say. I wrote a book about Lucifer; at no point did I conceive of something that messed up. Truth is, this cat is NUTS! And that’s why he’s a fantastic villain. Cartman is out his fucking mind, knows it, and doesn’t care. This is a psychopath without a doubt, a ten-year-old construction paper psychopath.

Tomorrow, the Festival continues! They don’t like bright light; sunlight will kill them. Don’t get them wet; don’t even give them water. And what ever you do, no matter how much they beg, never, ever feed them after midnight. Tomorrow, the Gremlins are tearing up my blog!