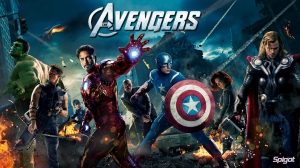 Hello boys and girls! Today on our wonderful little show, we’re going to try and experiment. Now, we both know that I LOVE villains and, quiet as it’s kept, you do too—that’s why you keep coming back, isn’t it? But it’s a brand new year, guys! We’ve done the villain is bad, look at how bad the villain is thing. So this year I’m going to look at villains from the heroes point of view. And we start with the Avengers.

I was gonna start with one of those “If you don’t know who the Avengers are, you’ve been living under a rock,” but the last time I did it, it was about Voldemort and I got a comment from the one person on the planet who didn’t know who Voldemort or Harry Potter were. I’ll suffice to say that if you haven’t seen it yet, you weren’t going to so you haven’t lost anything. For the rest of hep cats, you know the Avengers are the stars of 2012’s most popular films, a comic book supergroup (like Wings or Velvet Revolver). Their story is simple: they exist on their own, do their own stuff, somebody recruits them individually, they can’t play nice until somebody decides to blow up the planet. Then it’s all “We should work together!” and hugs and explosions and awesomeness. And yes, that is EXACTLY the verbiage on the back of the DVD.

In the film, you have 6 dominant personalities (or 7 if you count the Bruce Banner and the Hulk separately), and each one has their own motivations. They are pulled together by a super-secret agency that answers to a nondescript group of people to do unspecified stuff (that is my introduction to SHIELD, brought to you by Captain Specific Productions). Why do they come together? Because some nut job named Loki stole something powerful and really wants to be king. Of Earth. We’re going ignore the part about there really isn’t a king of earth position open at this time and just keep his resume on file. Anyway he wants to start a war. So you have these people who don’t play nice and a dude with an army from outer space and they are supposed to save everything, right?

To the untrained eye, we would see the central conflict in this little motion picture around the inability for the group form cohesiveness, thus wasting valuable time and resources until they are forced, by a tragic loss, to come together. But we aren’t the untrained eye, are we? We don’t buy that Loki is, for all his manipulative machinations and exquisite hair gel, the movie’s true villain. And we don’t even care that we a 12 second teaser at the end of the movie showing us Thanos, like he really is the super-secret villain of the movie. Nope, we’ve studied damn near 70 villains on this site and we know better.

We know that the real villain is SHIELD itself.

(This is where you insert the “Whachootalkinboutwillis?” face).

Sam Jackson plays the one-eyed bandit Nick Fury in all the movies leading up to the Avengers (Iron Man, The Incredible Hulk, Iron Man 2, Thor and Captain America) and in the Avengers itself. He’s running the show. When we see that Tony Stark has built himself a shiny suit of armor, who shows up? SHIELD? When the Hulk has broken Harlem, who’s running around behind the scenes? SHIE—well, no, actually that was Tony Stark. But he was working for SHIELD. And when Scarlett Johannsen slides her sexy tail in that black jumpsuit, who paid for the boots? SHIELD. You get where I’m going with this? SHIELD fooled with the Cube, SHIELD tried to steal Thor’s hammer (which DID NOT go over well), SHIELD tried to snatch Iron Man’s suit. SHIELD even lied to Captain America! You don’t lie to Cap, dammit.

The movie is based on an ulterior motive and everyone has one: Loki, most definitely; Thanos, most likely; and Nick Fury. All of them using the Avengers to get what they want. In the movie, it’s all about what Loki could or would do with the Tesseract if he had it. The truth is, Loki is only a symptom: the SHIELD folks have already abused it, building weapons and opening portals and shit.

My point here is the good guys weren’t necessarily good in this movie and the villain—the billed villain—was a patsy to hide you from the real bad guy. And the problem in this case is that the real bad guy is the one behind the good guy. You catch that? This is the epitome of “Keep your friends close and your enemies closer.”

Tomorrow, tomorrow is Day 2 of the A to Z Blog Challenge and we’ll be looking at the Batman! Na na na na na na Batman!!

One thought on “Day 1: The Avengers #atozblogchallenge”