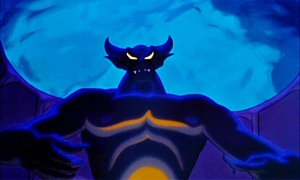 I’m almost done with this Disney villain nonsense. Almost. For the most part, Disney villains aren’t too shabby: they kill and steal and dog the shit outta people for some of the most mundane, mindless reasons. They commit wholeheartedly to their cause even if it means poisoning a girl for being pretty or trying to kill puppies or tying rockets to talking toys. Disney villains exponentially raise the value of villains because, for all the foul stuff they do, they do it in children’s movies. They are foul for the kids.

And if Disney villains commit, I can commit to bringing them to you. Here’s how deep my commitment goes: I HATE Fantasia. Seriously. I tried to watch it like 4 times and kept quitting a few minutes in because it was lousy. But when I decided to do a run on Disney villains, I got a list from Disney enthusiasts who said I HAD to cover Chernabog and, you guessed it, his ass is in Fantasia.

So fine, I’ll watch it. In fact, I love you wicked little readers so much, I even watched Fantasia 2000. Yep with the Butterflies of Good and Evil and dancing hippos and the Spring fairy thing and Mount St. Helens erupting (which was kinda cool). I saw Mickey and the damn brooms and Donald Duck on Noah’s Ark. And I finally saw Chernabog, the devil thing at the end of Fantasia. Boooo!

And he’s supposed to be one of the top Disney villains? He has like 4 minutes of screen time! No words, he doesn’t go anywhere, he doesn’t do much! What’s the big deal? Sure, watching him burn his own people was fun and I guess in 1940 it was deep but I was raised watching Darth Vader kill his own people through the TV. It wasn’t that big of a deal to me.

With each of my posts I try to give you at least 500 words. I don’t have that many. Instead I’m going with the age-old adage “a picture is worth a thousand words.”

Here’s my official opinion of Chernabog:

I was not impressed.

One thought on “MAYHEM OF THE MOUSE – CHERNABOG”