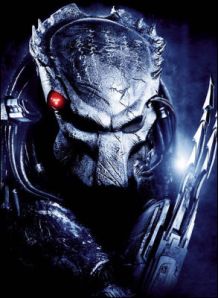 If you’re seven feet tall and like killing humans, clap your hands!

If you like pulling spines and your face is kinda jacked, clap your hands!

If you have a cloaking device that isn’t waterproof and you come to planet that’s 80% water, you wouldn’t be the wisest hunter in the galaxy…but you would be today’s Independence Day villain: the Predator.

Yeah I know the song fell apart but it does help you get the gist of this character. And in the event you were born after 1990, you might not know that the Predators have NOTHING to do with the Aliens—that’s more of a comic book driven marketing ploy than anything else…but we’ll talk about that too.

A long time ago, before Arnold Schwarzenegger was the governor of California, he starred in a series of low-brow action movies with plenty of explosions, bullets and one-liners. In one of these movies, Schwarzeneggar led an elite squad of mercenaries—including Apollo Creed and Jesse “The Body” Ventura (before he was the governor of Minnesota)—in a South American jungle to do some bullshit (I just saw the movie and don’t freaking remember what the hell they were doing). Anyway, they get systematically hunted down and slaughtered by a killer they cannot see. One that sees only their thermal image and likes to snatch people’s spinal columns out and hang them on trees. There’s lots of blood and yelling, yada yada yada and the Governator pulls some MacGyver shit and manages to take out an extraterrestrial hunter—a predator, if you will—packing advanced weaponry using some mud, a spear and two sticks of dynamite. But the Predator’s a little bit of a bitch: when his cloaking device is working and can’t nobody figure out what he is, the Predator is all leaping through the trees, laughing at people, screwing with them. But when the water fucks his stuff up and everybody can see him, when he’s all beat up and Arnold takes off his mask and calls him ugly, the Predator doesn’t take his L like a man: he suicide bombs the entire jungle.

Fast forward a couple years and a new Predator decides he doesn’t like Arnold’s politics and starts chasing Danny Glover in the streets of LA. Here, though, we get the see what the Predator is actually capable of. This cat has more gadgets than Batman: he has a net that tightens once it gets on you so you look like sausage when it’s done; a spear that he can hurl with frightening accuracy; a shoulder cannon that’ll make your head explode if he gets those 3 dots on you; and a Krull-style disc/boomerang thing that will cut through anything or anyone and return to sender. We learn that the Predator is like a big game hunter and is simply looking for the biggest challenge, win or lose. We learn they have a little bit of honor to their hunt, they’ve been hunting us for a long time (they give Danny an old musket from the Revolutionary War), and they’ve been hunting plenty of shit besides us, like T-Rexes and the Aliens (that’s where it started, folks). Watching Gary Busey die is one of the best scenes in the movie.

Any other time we see the Predator after this, they’re hunting Aliens on our world, either as some ridiculous rite of passage, killing Adrien Brody and Topher Grace as a group, or cleaning up the effects of when shit goes wrong. Like, you couldn’t see that coming? Seriously? You earn the gun for killing the Aliens with your bare hands? An animal that has acid for blood? And there’s no containment plan for when they get out? I continually second guess the intelligence of this advanced race.

So even though I’ve tearing them up, I still have some respect for the Predator and still think they have their awesome moment. Because, even though they screw up and get their asses handed to them, we encounter them because they kill us for fun. It is a sport. And our skulls are the trophies. That is what makes them awesome.

Up next, the most persistent and consistently unsuccessful hunter of all time: Wile E. Coyote. Th-th-that’s all folks!

2 thoughts on “Festival of Fiendishness: THE PREDATOR”